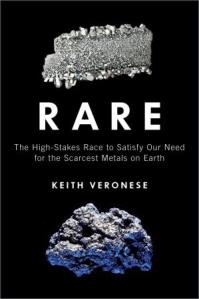 Keith Veronese earned his PhD in Chemistry from the University of Alabama at Birmingham in 2011 and is the author of Rare: The High-Stakes Race to Satisfy Our Need for the Scarcest Metals on Earth coming in 2015 from Prometheus Books. Rare takes an in-depth look at the little-known, illusive metals that power everything from smartphones to PS4s to nuclear weapons and the extent nations and corporations will go to extract them the furthest reaches of the globe.
Here’s some of the praise Rare: The High-Stakes Race to Satisfy Our Need for the Scarcest Metals on Earth has received:
“Rare is a clear and entertaining account of the fascinating properties of rare earths, their importance to the world, and the unique roles only they can play in many high-tech devices.”
—Theodore Gray, author of The Elements: A Visual Exploration and Molecules: The Elements and the Architecture of Everything
“Veronese presents an informative and entertaining…overview of the metallurgy and politics of rare metals.”
—Publishers Weekly
“Engaging, eclectic…. Veronese’s analyses of the various factors affecting supply of these metals adds up to a good overview…. Rare makes powerful points about the consequences of conspicuous consumption.
—Nature
“The underlying science is accessible and is deftly combined with comments on the often-overlooked societal implications of the planet’s chemical make-up. Viewed as a kind of ‘essential guide’ to crucial elements, Rare outlines their increasing geopolitical importance in the modern world.”
—BBC Focus Magazine
Veronese also wrote Plugged In: Comic Book Professionals Working in the Video Game Industry, which TwoMorrows Publishing released in 2013 and wrote extensively for the Gawker Media science flagship io9. He currently resides outside of Birmingham, Alabama with his wife and twin daughters. You can contact him via veronesepk at gmail dot com or drop him a line on Facebook or Twitter. For speaking engagements, e-mail angrybrainprods at gmail dot com.